The Virus: Land of the Setting Sun 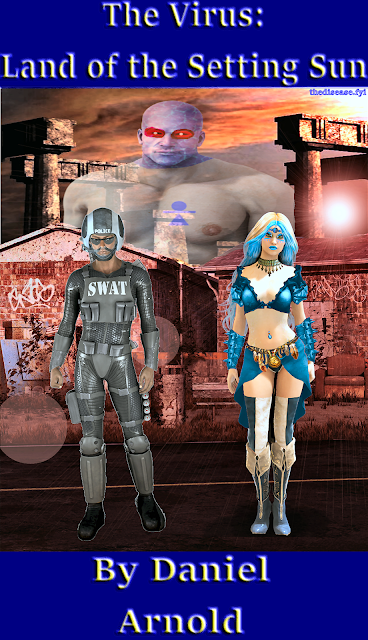 The Virus: Land of the Setting Sun. Available NOW on Payhip!
Zeke Coleman became a hero when he set up the SWAT unit to command Sunshine City's police force. When the Byzantine flu hits the City, crap literally hits the fan and gives Coleman his toughest challenge yet.
Introducing The Reckoner- popular morning show host by day, gruesome vigilante by night. If you escape justice, The Reckoner will make sure that you still pay for it- no matter what it takes.
18+. Reader discretion is advised.
Posted by Vicendum at 5:39 AM No comments:

Email ThisBlogThis!Share to TwitterShare to FacebookShare to Pinterest
Labels: The Virus

The following is an excerpt from the eBook "Soul of Honour: Roses". To read more, purchase the eBook at Payhip.

Part of the Vicendum Project.

As soon as the door opened, Blaise Meyer was roused from her sleep, hunched over her forearms as she was seated at the desk in the interrogation room. After rubbing her eyes and giving her head a shake, she saw two people walk in, renowned criminologist Doctor Pascal Yves and Patrolwoman Norah Anam of the Roman Commonwealth Marquee Patrol (RCMP). Yves took a seat right in front of Blaise, while Norah decided to lean against the wall.

Blaise was confused at why she was here, and annoyed that she had to be awake this early in the morning. Yet she was not going to show any fear to her interrogators and cede to them the power they desperately crave.

“Pretty rude to walk in here and not give me a coffee,” she said with a smug smile and looking Yves right in the eyes. “Especially when you rouse me from my beauty sleep.”
“You don't get to set the rules,” said Yves curtly. “You have no power...your reign of terror is over.”
“Besides,” said Norah, “you don't want the coffee here. The way Roy makes it, your heart will explode out of your chest...trust me, you're better off.”

Blaise snickered and shook her head.

“Given that I really don't want to be here,” she said, “my heart exploding out of my chest might not be so bad.”

“Oh is that the card you're going to play?” she said. “If I hadn't heard it about 100 million times and each time was a bluff, I might fall for it...but I didn't spend all these years as a Patrolwoman to be played like a fool.”

This time it was Blaise's turn to chuckle.

“This is no game, Patrolwoman,” she said. “In fact, it's you that's playing the game...bringing me here, dragging me into this room on, what, maybe an hour of sleep? Once I'm here, you just jerk me around and push my buttons until I give in and give you want you want...because you have nothing on me, and you continue to have nothing on me and you will always have nothing on me because there is nothing on me...and, besides, what's in it for me? I do you a favour and you throw me in jail? That doesn't sound like something I'd like to do.”

“You understand, right Callie?” she said with a toothy grin.

Yves simply smiled, looking right through Blaise. He knew what she was trying to do, and she was quite good at it because so many times before she had gotten the upper hand on him.

However, there would be no scowl from Yves. There would be no fit of anger as Blaise cackled in triumph. There definitely won't be a fist slammed on the table as Blaise laughed her way out of the door a free woman.

That's because this time Yves finally had the upper hand.

From his inside jacket pocket Yves pulled out an envelope and slapped it in front of Blaise, who looked on with genuine confusion. As Blaise anxiously opened the envelope and read its contents, Yves could only look on with a smug smile slapped on his face, one that expressed not just his joy but also the relief that- finally- it was he who got to celebrate in the end.

“I-I-uh,” said Blaise, stammering out of shock. “Y-You...you...really Callie? You can't do this! This is impossible! I mean...by Jove, seriously? I...I...n-n-no, no, no, no!”
“Oh yes, Blaise,” said Yves. “Yes indeed. With that search warrant, we're going to find everything, and your kingdom will come crashing down. There's nothing you can do...the RCMP are looking at your home as we speak. They've already told me about all the interesting stuff they've recovered from your home...Blaise, it's over. You've got nowhere to run now.”

Tears formed in Blaise's eyes, tears she valiantly tried to fight off. Her mind was racing, wanting to find some way to convince herself that she still had some way out of her peril, but her reality was foreboding.

“No, no!” said Blaise, shaking her head and wiping the tears from her eyes. “It's not true! It can't be!”
“Oh,” said Norah ominously, “but it can...and it is. You and your army of Roses...you knew this was only going to be a matter of time for you...and now your time has come.”
“...b-buh-but how?” said Blaise, in visible disbelief.

Norah smirked and circled the room, like a shark around her prey.

“It's simple, really,” said Norah. “The more minions you get, the more chances you have that one of them is going to crack...and one of them did.”
“Your cult of lies and deceit has run its course, Blaise,” said Yves. “You can't abuse and use these women and expect them to 'take it' forever. One day they're going to turn on you, and reveal you as the monster you really are.”

Blaise tensed up in her seat, a look of utter disgust coming over her face.

“Monster?” she said. “Is that what you really think I am?”
“All cult leaders are, by their very definition,” said Yves.
“No, no, no, no!” said Blaise, shaking her head profusely. “You have it all wrong...cult? I don't run a cult...I help these women...I give them a chance. Most of them...all of them...I gave them a chance...they were lost before me!”

Yves slapped his head with his hand as Norah walked up to the table and grabbed its edge, leaning towards Blaise in the process. She then looked Blaise right in the eyes.

“See, this is where I get to be the smart one in here,” she said with a knowing nudge to Yves. “Recruiting the vulnerable...that's the first thing cult leaders do, because they prey on the purposeless and hook them in with a false promise that only the cult can fulfill their lives. Once they're in, the cult leader then knows they have all the power over their charges, because the cult leader can hang their promise over all of their recruits like the Sword of Damocles and rub it in their faces. The sad part is, the cult members never call out their leader on their lie, because the cult leader likes to remind them that they were 'nothing' before the cult and there's nothing the member can do, because their leader is actually right. Which only deepens the hole the cult member is already in.”

Blaise wanted to respond, but Norah saw it and immediately cut her off.

“You're going to say you're 'different', right?” said Norah sarcastically. “That you didn't abuse your subordinates or treat them badly. You're probably also going to tell me that they could leave whenever they want to, right? You never physically stopped them, right?”

Blaise started to respond in the affirmative, but Yves stopped her in her tracks.

“Cult leaders know they don't need physical barriers to stop their members from leaving,” said Yves. “Because the cult's promise is enough of a psychological barrier to stop them from going.”

This time Blaise managed to get a response in after pounding the table with her fist so hard that she shook the entire room. She then buried her head in her hands and sobbed uncontrollably, ashamed at what she had done.

“No, no,” she said, her voice cracking with tears visibly falling from her face. “You...you have it...oh screw it...you're right...I...I guess I can't believe what I've done...b-but realize...realize please...I loved my women...I treated them like queens...all of them. They were my friends...no, they were more than friends...they were my family...th-the only family I ever had...I never meant to mistreat them...I...I never wanted to hurt them. I...I can't believe I've hurt people...I have a good heart! I'd never intentionally mistreat someone!”

She put her head in her hands and sobbed some more before regaining her composure.

“Who did I hurt?” she said desperately. “Who did I wrong? Please, please...I'm begging you...please tell me! I want to make it right!”

Norah stood back up and folded her arms.

“Right now,” she said, “that's privileged information...but if you help us...we may give you that chance.”

Blaise nodded her head, eager to do as they asked.

This was an excerpt from the eBook "Soul of Honour: Roses". To read more, purchase the eBook at Payhip.

Part of the Vicendum Project.

Posted by Vicendum at 3:15 AM No comments:

Email ThisBlogThis!Share to TwitterShare to FacebookShare to Pinterest
Labels: Soul of Honour

What is The Blue Rose?

Watch this space to find out!
Posted by Vicendum at 6:03 AM No comments:

No lockdown in Argentina

The quiet before the storm?
Two days after reporting 1,000 new cases of the Byzantine flu through a press release that offered no other details, Argentina's branch of the Imperial Health Authority announced today that- for now- there will be no lockdown imposed on the country. The IHA did not elaborate except to say that the initial cases were "contained", also saying they hope the bar that was shuttered because of the "outbreak"- Clancy's Tavern- "may" be able to reopen by the end of the month.
Stay tuned, guys.
Posted by Vicendum at 2:53 AM No comments:

Is trouble brewing in Chile?

Someone created a wax sculpture depicting the severed head of Chilean Emperor Eduardo Martinez and planted in front of the gates to the Imperial residence. No word on whether or not the perpetrator was ever identified, as the Chileans report they are "still investigating the matter".
I wonder if this has anything to do with the fact that Chile reported an "outbreak" of the Byzantine flu- which has kept virtually all businesses in Chile shuttered since 2012- was discovered yesterday in Santiago, despite the fact no victims have come forward and the Chilean officials are tightlipped concerning the details of the outbreak.
Whatever it is, this can't be good.
Posted by Vicendum at 2:31 AM No comments:

According to Argentina's wing of the Imperial Health Authority, the newest batch of Byzantine flu cases came from Chile. Predictably, the IHA has provided no proof of this beyond a press release, which has no detailed information about who has been infected and how many have been hospitalized, among other things.
Oh, and a day after the IHA reported 1,000 new cases in Argentina, no new cases were reported today. So the outbreak is contained, right? Not so, says the IHA, who maintain the novel norovirus is "as dangerous as ever".
All right...if you say so...
Posted by Vicendum at 2:25 AM No comments:

Who they are, we don't know, because, once again, the Imperial Health Authority keeps that information close to the vest.
The only good news is that, aside from Clancy's Tavern, Argentine officials are not requesting any businesses get shut down. Let's see how long that lasts.
Posted by Vicendum at 3:59 AM No comments: